Destiny goes offline for six hours for maintenance, which could mean that the Sparrow Racing League event will return next week.

Players who are seeking to play Destiny were not able to login to the game starting at 8 a.m. PT / 11 a.m. ET, but those already logged in were able to hang around for a little while to complete activities. Bungie is taking the game completely offline at 9 a.m. PT / 12 a.m. ET for five hours until 2 p.m. PT / 5 p.m. ET. 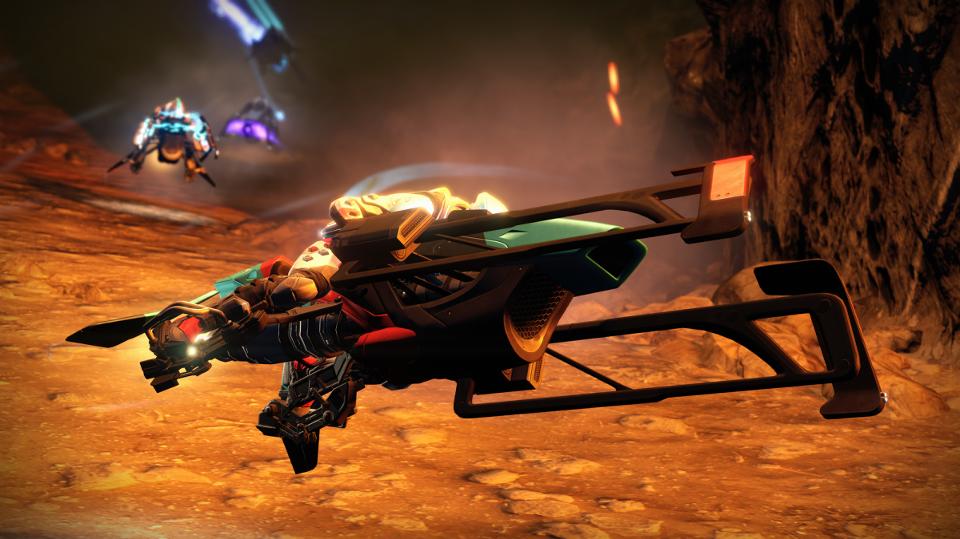 The studio did not give an official reason for the maintenance. However, all signs point to this as preparation for the Sparrow Racing League returning with the Tuesday, December 6 Weekly Reset.

Bungie will be at the PlayStation Experience scheduled for this Saturday and Sunday. Community Manager David "Deej" Dague placed a thinly veiled confirmation in the weekly Bungie update before the week of Thanksgiving that the studio will be at Sony's event to reveal this year's edition of Sparrow Racing, but any details have not been revealed."The week after, we'll be packing our bags for Anaheim, CA," Dague wrote at the time. "The particulars of our mission are still a mystery. We'll cross that finish line soon."Last year's inaugural Sparrow Racing League ran for a month and offered players a chance to race against others across two maps. There was also a $10 record book that could be purchased for additional rewards in the form of more stylish racing suits and Sparrows.

Still, Destiny players looking forward to SRL's return should expect to see the return of the Record Book likely with some expanded quest material. Bungie did the same with Festival of the Lost by adding a little extra to this year's event over the previous year.

An extra racing map or two is likely a safe bet as well. The Mars and Venus maps in last year's event were fun, but quickly became too repetitive to support a month-long event. A new map set in the Plaguelands seems most probable, but locations on the moon or even Oryx's Dreadnaught could be fun additions as well. The latter, especially so, since Sparrows can't be used in that patrol location at all currently.

Beyond that, players will match up in races featuring six players through tracks filled with boost gates and enemy minions shooting at them. End-of-race rewards included racing suit armor, as players worked through a Quest towards a Class S License from Amanda Holiday, plus various bounties. Could more be included this year?

Destiny: Is That Worth Buying

Intellect is exactly the stat you want, no matter what Titan class you’re rocking. At 310 Defense, you can potentially see up to 124 of this stat, but 110 is nothing to frown at at only 280 Defense. Strength is a great pinch of a secondary stat for Sunbreakers and Defenders.

The November Update will also contain good news for Hunters who draw from the Void with a fix that re-enables the Quiver perk. Nightstalkers will now be able to shoot three Shadowshots again, without the added “bonus” that previously took the rest of us to infinity and beyond.

How To Use Three of Coins In Destiny

If you play Destiny, then you know you only need very simple thing to be succesful. Exactly, coins or Destiny power leveling! Destiny players have been attempting to find the most efficient usage of the Three of Coins since Bungie first introduced the consumable item with The Taken King.

With just under a month before its September 15th release, Destiny’s third expansion is getting its biggest reveal yet. The Taken King will go live on Twitch today, and fans will get a great big helping of information about the new content.

Bungie detailed many of the changes and gameplay improvements coming to its addicting interplanetary MMOFPSRPG Destiny in a Twitch stream this afternoon. It was the first of three scheduled livestreams exploring the world of The Taken King

Destiny’s Best Weapon Is On Sale This Weekend

The day has finally come. Xûr, the exotic weapon and armor salesman in Destiny, is selling Gjallarhorn. For those of you who missed purchasing Ice Breaker from Xûr when it was first on sale—you know, back when strange coins were still strange and not slowly accumulating into the hundreds in your vault—try not to miss the boat on this one.